MHA On the Move Student Journey The Key for Courage

When Jason Lopez talks about his first career, working in law enforcement for the Department of Corrections in prisons, he sounds as if he’d been the one imprisoned.

“I had done 10 years,” Jason says. “I knew I couldn’t do that work any longer. It was changing me, changing my personality and eroding my happiness and quality of life.”

Despite that, he admits it still took courage to change careers that far into a job. “I know I could’ve just played out the string and retired from the department.”

During the job he says he developed an interest in healthcare that he couldn’t get out of his mind. It turned out to be the key to his freedom. 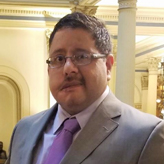 “I wanted to maximize my experience. I did that by going to nearly every event the program put on and really engaged with the staff and my classmates – both groups were absolutely amazing, caring people.”

“I decided to take the chance and it led me to a much more rewarding life.”

Jason found his reward at MSU Denver in the MHA program where he says his zeal for learning, work and life was reignited.

“I wanted to maximize my experience,” he says. “I did that by going to nearly every event the program put on and really engaged with the staff and my classmates – both groups were absolutely amazing, caring people.”

Jason completed the coursework, outside of his internship, in 11 months.

“Now I’m learning all the ways I can apply the degree – it has given me a lot of options and rekindled my passion for learning.”

“I’d love to be the voice for those who need one in this country.”