Meet the CLAS Dean, read our mission, view our accredited programs and learn more on other important areas 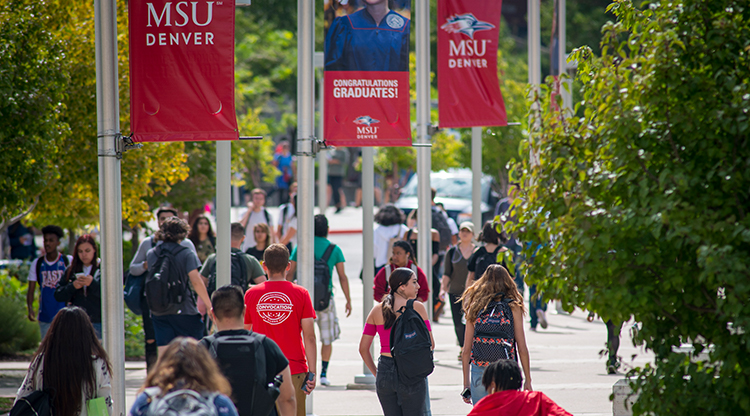 Get to know the College of Letters, Arts and Sciences John Masserini, DMA is the Dean of the College of Letters, Arts and Sciences

Dr. John Masserini is Dean of the College of Letters, Arts and Sciences. Masserini joined Metropolitan State University of Denver in July 2021 after leaving Northern Arizona University, where he served as the Interim Dean for the College of Social and Behavioral Sciences.

Dr. Masserini is an academic leader dedicated to providing higher education opportunities to anyone that seeks them, as higher education is the greatest proven catalyst for a life of substance, bringing with it social, economic, and career mobility. His work focuses on the symbiotic nature of academic and organizational efforts that lead to student success. He currently serves as the Dean of the College of Letters, Arts and Sciences at Metropolitan State University of Denver (MSU Denver).

Dr. Masserini’s vision, leadership efforts, and daily work involve enabling academic units to demonstrate the interdisciplinary reality of the human experience to our students, through the lens of the humanities, arts, and sciences; cultivating equity-minded and inclusive practices throughout the college; investing in and supporting holistic student success structures at the university; and building strong connections between educational institutions and the communities for which they live and serve. With a specific focus on those that are historically minoritized and underserved, he looks to dismantle long-standing barriers in higher education by providing full access and support with academic excellence, graduating engaged and thoughtful citizens who pursue meaningful careers and full, productive lives.

Prior to joining MSU Denver, Masserini was Professor of Music and served in various administrative roles at Northern Arizona University from 2008-21. Among them include: Interim Dean for the College of Social and Behavioral Sciences (2020-21), Vice Provost for Academic Affairs (2018-20), Associate Dean of the Graduate College (2014-18) and Associate Director of the School of Music (2011-14). From 2001-08 he served on the faculty in the Department of Music at Idaho State University.

In addition to his more traditional work in the field, Masserini has completed several grant-funded performance projects with longtime collaborator Melanie Kloetzel, Professor of Dance at the University of Calgary. Their work combines music, dance/movement, and various forms of media. International and national invitations to showcase these interdisciplinary performance art works include the Congress on Research in Dance (CORD) 2011 Annual Conference: “Moving Music / Sounding Dance” (Philadelphia, Pennsylvania); Collision 2006: A Symposium on Interarts and Interdisciplinary Practices (Vancouver, British Columbia); and a main-stage appearance at the 2006 On the Boards – Northwest New Works Festival (Seattle, Washington).

The academic programs/majors listed have individual accreditation or approval

The Art major for the Bachelor of Fine Arts is accredited by the National Association of Schools of Art and Design (NASAD).

The Chemistry Department is approved by the American Chemical Society.

Accredited by The Commission on Sport Management Accreditation (COSMA)

The bachelor of science in Meteorology conforms to the American Meteorological Society and National Weather Service recommendations for an undergraduate meteorology degree.

Metropolitan State University of Denver is an accredited institutional member of the National Association of Schools of Music.

The theatre major for the BA, BFA in Applied Theatre Technology and Design Concentration, and BFA in Music Theatre concentration is accredited by the National Association of Schools of Theatre (NAST). Submit your story & view past issues of the Rowdy Report, the official newsletter of CLAS.

College of Letters, Arts and Sciences